Well Hello out there. Welcome to Vikings Hot Talk. I will be your host Cyrus Bahr. Just to let you in on what I plan to do on this blog, I hope to raise some interest in some of my opinions on the Minnesota Vikings and other sporting issues out there. I hope to get our fan base out there to voice there opinion in a free but tactful way. I hope to generate a little controversy with some of the local columnists like Mike McNegative, aka Mike McFeely. Enough about me. What about you people out there. I want you to voice your opinion. Without you this site will not be possible. So let's speak our minds. Lets talk sports and lets see what people really know out there.

This past Sunday, the Minnesota vikings lost their first game of the season. 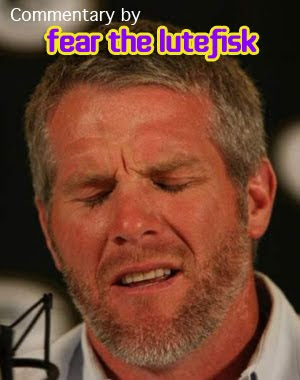 This past Sunday, the Minnesota vikings lost their first game of the season. Given that their previous opponents were of questionable quality, this may be cause for some alarm among the Viking faithful. My view, however, is somewhat different.

In the first place, the Vikings were playing the world champions on their own field. A win under these circumstances would be exceptional for any team. Secondly, the lost in a sand lot free for all that could have gone either way. The fourth quarter was one of the most exciting quarters of football I've seen in more decades of football watching than I care to admit.

But most importantly, I think the Vikings have a solid team in every phase of the game.

Most important is their new quarterback, veteran of a couple of retirements, Brett Favre. Now, there are a couple of side issues here that I think important. I get tired of superstars "retiring" and then "coming out of retirement." Even for superstars like Michael Jordan and Favre, take heed of Emily Post's advice: "having risen to leave, LEAVE." But when Brett announced he was considering "coming out of retirement," my least favorite sports commentator said "what a shock." Only time I've agreed with Mr. Halstrom.

But Favre is different. He still plays the game with all the energy of a sand lot player. Remember the downfield block he made earlier in the season? the national announcers said that he would be talked to by the Vikings staff and not do it again. They were wrong on at least one count. So Favre is still having fun out there, and plays the game with a vim and vigor seldom seen in the NFL. In fact, I've known NFL players and have been very close to the playing field in the early days of the Vikings(remember that the left field fence was the back of one of the endzones in the old Met? I used to sit in the first row behind that fence). If these players were having fun, you could have fooled me. Professional football is brutal, hard, battering, bruising and stressful. Most player's careers are just a few years They just can't take anymore. Stand by the tunnel when a team takes the field and see if you think these people are about to have fun. But Favre seems to do it. That makes him almost unique, out of retirement.

Moving on, Adrian Peterson is obviously a superstar. I don't think the Vikings have ever had a running back of his caliber.

One thing that has always concerned me about the Vikings is their line play, both offense and defense. Even in the days of the Purple People Eaters, their defensive line was so ferocious that they actually won ballgames by themselves. But there was an easy way to beat them that apparently nobody except Hank Stram, the dapper coach of the Kansas City Chiefs, saw. Simple. Don't throw passes. The year the Vikings made it to their first super bowl(against the Chiefs), I watched a televised game between Kansas City and someone else in which the Chiefs won and did not throw a single pass. I thought to myself at the time, "that's how to beat the Vikings." Sure enough, it came to pass.

From that point on, the Vikings pass rush began to detereorate until in the 90's it was non-existent. For a couple of decades it was poor, and I ceased being a Viking fan, because the defensive philosophy was one that couldn't work. That is, rush the passer on every play regardless. The Williams boys have plugged this gap in the vikings defense.

From the start, the Vikings offensive line has been spotty. There is, I think, a maxim: give an NFL quarterback enough time and he will complete a pass to somebody, probably in an inconvenient place on the filed for the defense. Thus the anemic Vikings pass rush of the past and their inability to protect the quarterback is a double loser. But now they're able to protect Favre while limiting the opponents quarterback's time, so I think they're solid on both sides of the ball.

There have been some injuries, particularly in the defensive secondary, but that happens to everybody.

So take heart, Vikings fans: you might have a good second half of the season ahead of you.
Posted by Find Fargo Real Estate or FM Realtors at 1:05 AM 2 comments:

Labels: the Minnesota vikings lost their first game of the season., This past Sunday
Older Posts Home
Subscribe to: Posts (Atom)

This week’s roundup highlights some of the Best Minnesota Vikings Fan blogs around, for the reading pleasure of Vikings Fanatics worldwide. Enjoy!

The Daily Norseman
The Daily Norseman is truly a pinnacle of Vikings blogs, it’s what most football blogs aspire to be. The writing is often witty, providing great in depth analysis of Sundays games, future gameday speculation, and allows posts from a fun and respectful community of serious Vikings Fans.
Notable Post: Crazy Stadium Costs

The Vikings Locker
The Vikings Locker prefers to keep pure speculation to minimum by focusing on the hard game facts, in depth highlights and breaking Vikes news. The locker also boasts some of the most accurate injury reports and best pre-season coverage to be found.
Notable Post: Will Brad Childress help the Minnesota Vikings Continue to Improve in 2008?

Vikings Gab
While it may be only a little over a year old, Vikings Gab is quickly becoming one of the most promising Vikings blogs with its awesome array of pictures, videos and amazing breadth of coverage. Helmed by sports media vets Matt Loede and Peter Durstman, Vikings Gab provides no-nonsense detailed analysis of games with only well-informed speculation.
Notable Post: No Bad Blood Childress, McCarthy

Viking Underground
Viking Underground is a real gem of the Vikings blogosphere. From its great collection of quotes to its awesome original training camp coverage, the Underground is worth any fans time. It’s unfortunate that the blog hasn’t been updated in a while but is seems that author Mr. Cheer or Die might be contributing over at the Daily Norseman. Just to let you know a little bit about the one forming opinions on this sight. I am 34 and work as a flooring salesman full time. I am married with no kids and 2 dogs. I live in West Fargo, ND. I grew up in the small towns of Barney, ND and Kindred, ND. These are the towns where I realized that I am an absolute sports fanatic. I love mainly 3 sports Football being #1, baseball and basketball. My main passion being the Minnesota Vikings.

It all started in 1980 when I was about 7 years old at the Old Metropolitan stadium in Bloomington, MN where the Mega Mall now stands. My father and I had taken a bus from a restaurant in the small city of Wahpeton, ND. On this cold December day I got to witness one of the greatest Viking games of all time. They were playing the Cleveland Browns. Man this game had it all. Blocked fg's and xp's by both teams. All kinds of passing yards, I believe Tommy Kramer threw for 456 yards and one hail mary that was division clinching. If any of you are old enough you will remember this game. The hook and lateral that set it up by Ted Brown. Then the pass, man it sailed through the air for what seemed like an eternity. Tip, Tip, Tip silence and then all of sudden the biggest roar you could imagine. Wooooooohooooo, the Vikings win the Central Division. This is why Ahmad Rashad is still one of my favorite players. Man he was so silky smooth and he still this side of Cris Carter the best hands of any Vikings receiver in my memory. This is why football and the Minnesota Vikings are my passion. Maybe if I was 7 years old at the Metrodome when Kirby hit my second favorite play in sports history, the home run that put the Twins in game 7, that maybe I would have passion for the Twins like I do the Vikings. But at that moment the gods of above anointed as a messenger for the greates sport of all time Football. I played it and I loved it I just didn't have the skills and size to make a full time job of it.

So there you go and here I am. I hope the first was enjoyable to all. I will be back tomorrow with a more opiniated article, one that might get under a few people's skins.
Later